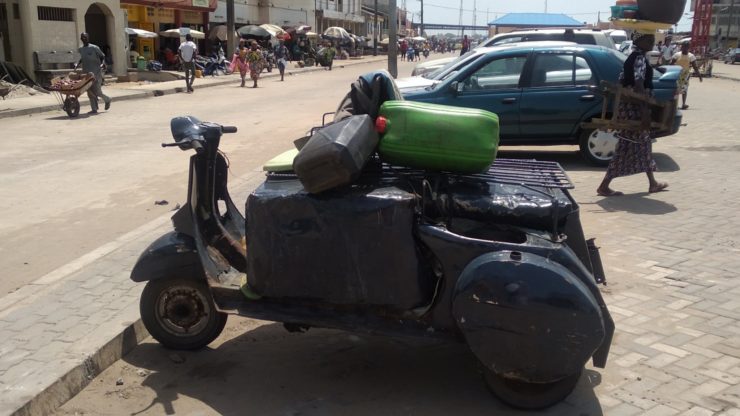 Boasting a population of 25 million, the markets of Cameroon are full to bursting. Along with dirt roads vermillion, turquoise and saffron handwoven mats are spread out as far as the eye can see, every empty space between them dotted with bowls towering with tomatoes, pepper, onions and garlic.

Peppery smoke from suya stands billows over DIY wooden shacks as sweat glazed men and women buy and sell anything that can fit in your hand. And for every person filtering through bowls of gold necklaces, fanning themselves outside Bukka huts and wandering along the red clay roads, there are two barrels of illegally smuggled oil.

Cameroon produces over 16.86 million barrels of crude oil every year, yet Ndian, one of the country’s biggest principalities has no filling stations as at 2018. Instead, in its bustling markets, yellow red-capped containers of oil are bought and sold at less than half the price of petrol in its filling stations. This petrol, locally called zoa zoa, is cheap, of poor quality and entirely Nigerian.

With a crude oil production capacity of 2.5 million barrels per day, Nigeria ranks as Africa’s largest oil producer and the sixth-largest oil-producing country in the world, ranking over Oman, the United Kingdom and Pakistan. With over 37.2 billion barrels of proven oil reserves, oil in Nigeria is the cheapest in West Africa. Petrol in Nigeria costs 40 cents, a staggering difference to the $1.05 average of its West African neighbours – Benin, Cameroon, Togo, Senegal, The Gambia and Liberia, etc.

Petrol prices in Nigeria are directly subsidised by the government, with this year’s projected budget being estimated at N1.149,385 trillion. With the global price of oil rising from $49.49 per barrel in 2015 to as much as $75.78 in 2019, the cost of the Nigerian fuel subsidy is threatening to exceed the Nigerian treasury’s pocket but while Nigeria boasts the 7th largest population in the world, a significant proportion of the 512,000 barrels of oil consumed by the country daily isn’t burned in Nigerian cars.

Illegal oil smuggling and bunkering is a highly organised criminal activity in Nigeria with Dr. Maikanti Baru, the immediate past managing director of the Nigerian National Petroleum Corporation (NNPC), claiming it costs Nigeria 10 million litres of petrol daily. And The Human Rights Watch claiming it accounts for 10% of the entirety of Nigeria’s oil production.

“The subsidy regime in Nigeria provides an economic incentive for smuggling Nigerian petrol to our neighbours,” SBM Intelligence, a socio-financial research company based in Lagos, said in a report published on its website.

Methods such as hot-tapping and cold-tapping steal thousands of barrels of oil per day from established oil pipelines. Along with this is the armed robbery of crude oil transportation vehicles on their way to shipping terminals for export. The profits to be made are extensive.

With no capital costs—the infrastructure belongs to the Nigerian government and the oil companies — the profit is usually around the US $2-3 million daily with an assumed figure of 150,000 bpd of stolen oil. The stolen oil is transported through two main channels: the barrels are either loaded onto huge trucks and driven into neighbouring regions or they’re loaded onto longboats and transported to neighbouring countries through many of Nigeria’s bounteous rivers.

When they reach their destination country, everywhere ranging from Benin, Ghana, Togo, Cape Verde and Niger, they are picked up by motorcyclists and driven through the winding, steep roads to be sold in marketplaces. This corrupt cycle is estimated to cost Nigeria $2 billion daily but the cost is more than financial.

The motorcyclists who carry this dangerous cargo are commonly referred to as “human bombs” in Benin due to recurring explosions from carrying such volatile and hazardous material.

Explosions due to illegal oil bunkering have claimed thousands of lives all over West Africa. But the cost of lives for many Western African countries, is worth the profit.

The highly profitable illegal oil thieving business is so successful it’s come to single-handedly fund several African countries’ economies. In Benin alone, it is a business that generates 105 billion CFA every year (around US$172 million) according to Javier Corso of Equal Times. It’s been so profitable it’s not only widely accepted in Benin, it’s legal. The illegal transport is governed by the Association of Importers, Transporters and Retailers of Oil Products (AITRPP), an officially registered body, despite its illegal dealings whose very business is founded on stolen Nigerian wealth. But other countries do not share the blame alone.

The Nigerian government’s system for selling its own oil attracts many shady middlemen, creating a confusing, high-risk marketplace. Nigeria’s oil industry is also one of the least transparent in the world in terms of sales and associated revenues. There’s much room for improvement in our governing system but it seems the administration is beginning to take the first steps to fill it.

In April, the Department of Petroleum Resources (DPR) employed the help of French data firm Kpler to help deploy satellite tech over the Niger Delta river, the smuggling syndicate’s most popular route, to weasel out illegal ships. But these steps are still small despite the huge effects this business is having on the country: fuel shortages, explosive fires, environmental destruction of oil spills and reduced GDP.

Oil has always been Nigeria’s biggest export, yet it seems we didn’t realise just how much the country is losing every day.