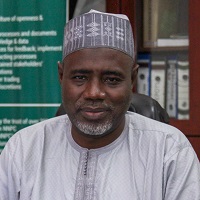 Engr. Lawal Bello is an Electrical Engineer with expertise in Process Control and Project Management. He was born in Katsina, the capital of Katsina State, He began his early education at Sararin Kuka Primary School, Katsina and Government Secondary School Birnin Gwari, Kaduna State. He attended Ahmadu Bello University Zaria where he graduated with B. Engineering degree in Electrical Engineering, University of Lagos where he obtained M.Sc degree in Electrical Engineering, University of Nigeria Enugu Campus for his PGD in Business Administration and MBA in the same University. He had a brief career as Graduate Assistant in Abubakar Tafawa Balewa University Bauchi, later as Computer Engineer in the then Department of National Civic Registration Katsina (Now National Identity Management Commission) and as Electrical Control Engineer at Katsina Steel Rolling Company Limited Katsina.

Engr Bello is a Registered Engineer with COREN and member of Nigerian Institute of Management (Chartered). He has attended various technical and leadership courses in Nigeria and overseas. His hobbies include reading and guiding others. He is happily married with children.